If you had been walking around Dolores Park in San Francisco, CA, two weeks ago, you would have been greeted with this intriguing sign: 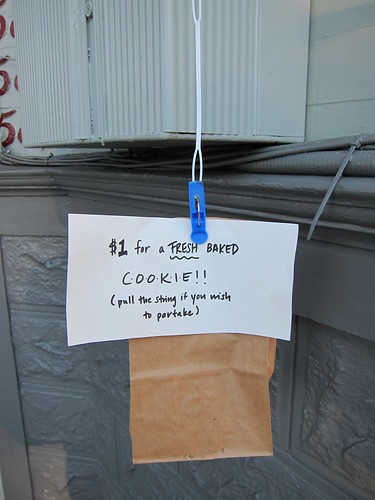 So you pull the string. Then you are greeted with this sight: 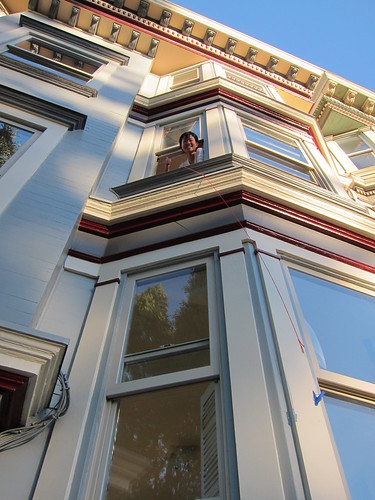 That’s Kathleen Chen, one third of the Fat Cookies team. Eve Hu and Clem Wright are the other two-thirds. The trio hail from Harvard and Google. Perhaps this is what they came up with in their 20% time? (I kid, I kid! Got nothin’ but mad respect for ya’all!)

I love seeing this kind of entrepreneurial gusto. It’s so simple, yet daring. And a bit illegal. More on that later.

Most people would think about buying an expensive storefront and starting a bakery. Some might pound the pavement for months, trying to curry favor from Whole Foods and gourmet markets. Others might jump onto the online cookie bandwagon and drop several grand building an ecommerce website.

Not this trio. They had a more ingenious idea. On February 12th, they capitalized on their choice spot near the crowded Dolores Park and hung a little sign out their second-story window. With low business rental and material costs, and at a dollar a cookie, they probably earned enough to pay for their lunches for a week. (Oh wait, Google offers free lunches. Cha-ching!) Not bad for a homemade cookie operation.

Jesse Hirsch of SF Weekly met with the trio and got a more humble version of their origins:

[In the beginning,] co-owners Kathleen and Eve couldn’t even get their friends to join the Fat Cookies Facebook group. “We would sit there hitting refresh on the computer, waiting for anybody to join,” Kathleen says. “It was very sad.”

Edw Lynch of Laughing Squid may have the honors of igniting their fame after spotting their simple attention grabber one fine day. And for a brief period, they flared. Word reached as far as Austria, Germany and the UK. Their Twitter account earned hundreds of follows and their Facebook group grew past one thousand fans. They were hip, hot, cool, indie; everything you’d expect around Dolores Park.

Then the po-po shut them down. But at least “they were really nice about it,” added the Fat Cookie team.

The law spoke clearly. No permit, no cookie sales. On February 21st, the Fat Cookie string was retired and the team contemplated their next move towards World Domination. Or at least, World of Cookies Domination.

I’m sure this entrepreneurial trio will be back with something cool (and legal). Like an ecommerce website? Or distribution through Whole Foods? I dunno, but until then, I guess we’ll just have to hang around Dolores Park and look for other strings on which to attach our money.

I'm an idealistic realist, humanistic technologist & constant student. And what, you want to Internet-stalk me too? Why, sure.
View all posts by Mike →
This entry was posted in Business, Food & Drink, San Francisco Bay Area. Bookmark the permalink.