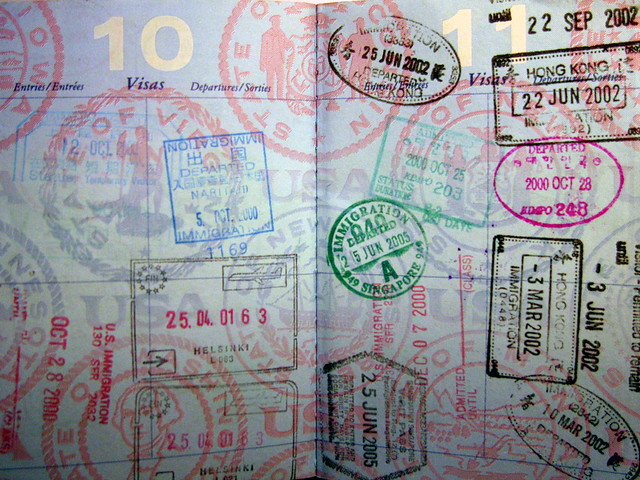 A variation on this piece was originally written for Hey it’s Johnny C and has been reposted here with permission.

Though I was born with the privilege of the blue passport that makes traveling a bit easier with less places to go to for visas, I don’t feel that American beyond the individuality and independent spirit. And with my strange last name, skin color, eyes, and hair, I have a few traits beyond the genetic makeup that designate me as a Chinese-Filipino guy. So beyond eating with chopsticks or a spoon and fork, taking my shoes off before entering a house, and bowing to people, I don’t really feel that Asian, but it helps since I have a strong preference that borderlines exclusivity for dating Asian women.

When I first came to the United States in 2002 and years before I discovered I was a Third Culture Kid, the first thing anyone does in a new country is search for a way to fit in to alleviate the loneliness and boredom. I figured because I was Asian and had an American passport, I would fit in with the Asian-Americans. It made sense at the time, because the summer before, when touring the country and looking up colleges, I enjoyed the passion and progressiveness of the Asian-American community when reading books by Ron Takaki and Helen Zia, as well as developments in the Chinese-American and Japanese-American community. My admiration had grown for those communities when I did a comparative literature essay for my final in IB World Literature on Amy Tan’s The Joy Luck Club and Jeanne Wakatsuki-Houston’s Farewell to Manzanar. Needless to say, I was excited to be amongst people whom I could call my own and understood me when nobody else could. Boy, did I think wrong.

Like in any community, there are individuals who stand out and win you over with their passion and dedication. For the most part, many people in each ethnic community aren’t thinking of the community as a whole, but defining who they are, trying to survive, and seeing what they can get out of life, including any benefits as members of a particular group. When I talked to anyone who happened to be Asian-American about my goals, social justice, solidarity, and history, most people who weren’t progressives (even those in college) didn’t seem to care. In fact, it was more like their ethnicity was either a fashion statement or an exclusivity club, including the Asian supremacists who refused to talk to non-Asians. Those supremacists even had their own strange way of defining how Asian one was based on a strange criteria, such as one being “less” Asian for not speaking an Asian language, or deemed a traitor to the race for not dating an Asian.

Silly notions of what constitutes race and ethnicity aside, I still admire the Asian-American community as a whole. Their culture is a fusion of both their Asian and American background, not two separate ones, but a synthesis, something new birthed from the marriage of heaven and hell. An example of something distinctly Asian-American: fortune cookies. You won’t see these outside of American Chinese restaurants, because they were invented in San Francisco, and don’t exist anywhere in China.

Recalling a recent experience at the Japanese-American obon festivals I went to in July, the speaker mentioned how in the mother culture of Japan, the temple recognized the holiday, but the community celebrated with a festival. In America, the temple and the community are one and the same, which is what makes the temple the organizing body for the festival since it’s where the community gathers. People from all over Southern California attend multiple obon festivals at different temples throughout the month of July, and it’s truly an amazing experience, not limited to Japanese-Americans–they invite everyone to dance and partake.

Taking it back even further, I recall my sister once said that Americans have no culture of their own because they are just a mix of different European immigrants in one country. It is not just the fusion of cultures, it is the environment that helps birth a new culture, or in this case, cultures. Using the faulty logic of not having any culture, that means jazz music is just a mix of African rhythm and English folk music, which is not even close to what jazz is as a distinctly African-American-originated musical genre.

In other words: cultures evolve. American culture is by definition from an amalgamation of different cultures, and within it, even more cultural groups within such as Asian-Americans, African-Americans, Latino-Americans, and Native Americans.

As a Third Culture Kid and activist for the Asian-American community, I’ve grown to love them and have a special place for the Japanese-American and Chinese-American communities. When I look at these communities and at the Third Culture Kids, I feel what we have in common is both the struggle for identity and acceptance. Second-generation Asian-Americans in the 1980s and 1990s really had a lot of trouble wondering just who they were, with parents imposing old values onto them, being raised to be individuals with American perspectives, yet being seen as forever foreigners by their fellow citizens, to the point of being denizens.

Third Culture Kids would be lucky to have this, because at least the Asian-Americans have a place to call home, even if their neighbors don’t welcome them wholeheartedly. One day, they can dream of being accepted as fellow Americans in spite of the prejudices felt, but us Third Culture Kids usually need to be told that we are TCKs before we can establish a community of sorts, and even then, what draws us together besides our common experiences?

Ultimately, it’s what makes me realize the necessity for redefining ourselves. This isn’t limited to TCKs, because as the world shrinks (yes, it isn’t growing) through globalization, borders, nationalities, and ethnicity become a limitation more than anything else.

As Third Culture Kids, as global citizens, as individuals, we need to think of new ways to define and redefine ourselves. A fellow TCK, Brice Royer, told me that he doesn’t define himself based on his ethnicity, his nationality, or the country he lives in, but by the values and dreams he has; and the people he calls his own are people who share those values and dreams, not passports or ethnicity. This is the attitude we as TCKs should adopt, for the world is our home and our community is everyone who believes in making this home better and open to all, rather than drawing lines to separate us. And because of its universality, it is something global citizens–people we should strive to be whether or not we are TCKS–must follow.

Culture is not an exclusive club that one can not partake in just because of race or nationality, nor is it something we should shun or see as something the allegorical Other has that makes us different from them. It is also not something that limits us, it is a set of guidelines and foundation for values, morals, practices, norms, ideas, and more. It changes over time, and it has a personal element to it which is why people call it “their” culture as something they can call theirs like a prized possession, for it is a part of how they define themselves. Here’s something we often forget: we can choose whatever we want to follow. We don’t have to do things because everyone else does it or our parents tell us what we have to do. But it is something to celebrate when you understand just what it means to you, which is hopefully more than just the skin color you were born with and the stuff your parents and society tell you to follow.

ABOUT JOHNNY C: Self-proclaimed “Accidental Asian-American” and Third Culture Kid, John “Johnny C” Chuidian is known to have a lot of passions, but not enough time. Growing up between Manila, Hong Kong, and California, he received his BA in International Development from UCLA in 2008, and is currently pursuing his MA at UCSD in Human Rights and Sustainable Development. You can read about his adventures, Asian-American and Third Culture Kid reflections, and more on his blog at heyitsjohnnyc.wordpress.com.

Thanks for rating this! Now tell the world how you feel - Share this on Twitter and on Facebook.
(Nah, it's cool; just take me back.)
MOODTHINGY
How does this post make you feel?
This entry was posted in Family, Lifestyles, Observations. Bookmark the permalink.