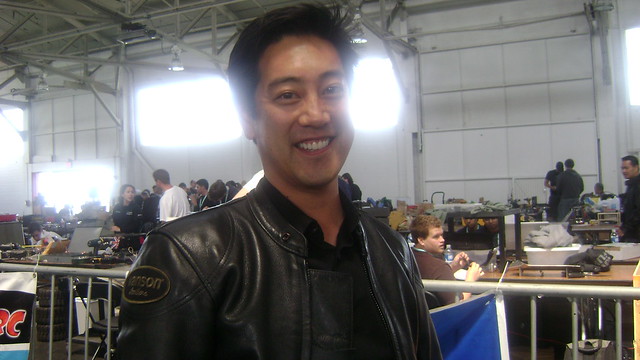 For those of you eligible straight ladies who are in the Bay on June 23, the Guardsmen are having their annual Bachelor Auction to help support their programs for at-risk youth in the San Francisco Bay Area. Among the many fine–and God, do I mean fine–men who are available for bidding is one Mythbuster by the name of Grant Imahara, as well as Larry Chiang, a former male model turned businessman and bestselling business writer. Mr. Chiang can run my business any time.

I DID run into Grant Imahara in real life at the SF SoMa Whole Foods and found him all right, though apparently my roommate was completely fan-boyed out. I pushed the roommate aside so I can finish my shopping. Anyway, apparently the Bachelor Auction has spawned a couple of weddings, so who knows? Maybe a potential husband is waiting in the wings for a lucky lady.

Efren is a 30-something queer Filipino American guy living in San Francisco. In the past, he was a wanna-be academic even teaching in Asian American studies at San Francisco State, a wanna-be queer rights and HIV activist, and he used to "blog" when that meant spewing one's college student angst using a text editor on a terminal screen to write in a BBS or usenet back in the early 90s. For all his railing against the model minority myth, he's realized he's done something only a few people can claim--getting into UCSF twice, once for a PhD program in medical sociology which he left; and then for pharmacy school, where he'll be a member of the class of '13. He apologizes profusely for setting the bar unintentionally high for his cousins. blog twitter
View all posts by Efren →
This entry was posted in Dating, Lifestyles, Local, San Francisco Bay Area. Bookmark the permalink.