Do All Asians Have Flat Butts? I like big butts and I can not lie

You other brothers can’t deny

Every time I hear those lyrics, I cringe. Why? Because I admit that I have a flat butt. Please, no jokes. I’m a little sensitive about it. Once I asked an ex-girlfriend if she thought I had a nice ass and she said I had a wonderful personality. I should have known then that the relationship was doomed.

You’re probably saying, “Women don’t care if men have big butts.” But according to Yahoo! Answer!, which knows everything, women do.

Do women Like men with Big Butts?? Do women like tighter pants on men? Do women find men with big butts attractive ??

Im 19 a male I have a big butt and big thighs and pants don’t fit me right so sometimes I buy them a little baggy. I play sports and workout alot I think i got it doing squats all the time in highschool trying to increase my vertical leap. Yesterday at work I wore some tighter pants then usual because the rest were dirty and my female co workers said I had a nice butt.

Also should I start wearing fitted jeans or maybe skinny jeans to show it more or wear looser not to show as much??

The best answer, chosen by the readers was:

hey! girls like guys with big butts but big thighs are a turn-off……so to hide them i think baggy and loose-fitted pants are suitable….never wear skinny ones(they’ll look horrible!)

And I’d like to note that the following answer had 0 votes:

women do not look at the butt size its all about the overall personality , its the way you dress the way you talk. and when its about the pants , loose pants go better , please avoid tight pants. they will just make u look bigger.

And here’s a choice quote I found on a forum that encapsulates everything I’m saying:

… guys with a butt look better than guys with no butt at all.. LOL I mean there are some asian guys who have no butt and i’m like damn wheres the cushion to grab when your pissed off.. LOLxD hahahahhaa yeah so i would prefer a guy with butt.

To be fair, according to this very “scientific” poll I found on the Internet butt size doesn’t matter but how trust worthy could a survey with less than 200 votes be? 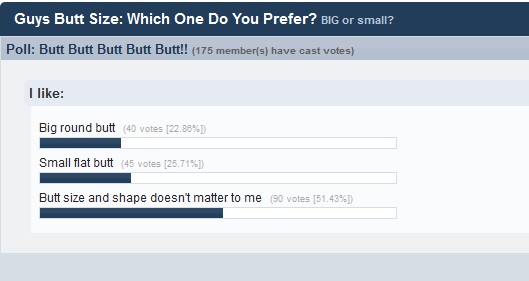 Since I’ve already written about Asian vaginas, breasts, and penises , I figured it was time to explore the world of Asian butts. (~_^) The question I’m dying to know is: Do all Asians have flat butts like me?

First, there is a (racist) term for the stereotype: Asian Booty Disease (ABD). According to Urban Dictionary, ABD is “a complication that effects 99.7% of the Asian population. It is usually noted at the age of 15 by young Asian girls who try to shake their ass like black girls in music videos seen on BET and MTV.”

But is there really a correlation between butt size and race? The first place I searched was Wikipedia to see what they had to say:

Certain physical dispositions of the buttocks—particularly size—are sometimes identified, controversially, as a racial characteristic. The most famous intersection of racism and buttocks may be the case of Saartjie Baartman, the so-called Hottentot Venus.

There wasn’t a lot of information out there. Truth be told, there was NO reputable source that I could find. But there were tons of unreputable sources. The most “scientific” of those was the following quote I found:

The ethnographic record {e.g., A French Army Surgeon (1898/1972), a 30-year specialist in genitourinary diseases} makes reference to numerous anatomical distinctions which show a similar pattern of whites being between blacks and Orientals. These include the placement of female genitals (Orientals front and high; blacks back and low); angle and texture of erection (Orientals parallel to body and stiff, blacks at right angles to body and flexible); salient buttocks, breasts, and muscularity (Orientals least, blacks most); and size of genitalia (Orientals smallest, blacks largest).

There were some “theories” as to why Asians have small/flatt butts. My favorite is one that “sounds” scientific but is just a wild guess by an anonymous Internet user:

asian men may have preferred to reproduce with asian women who were more petite (e.g. smaller butts).

african men may have preferred to reproduce with african women who were bigger, more muscle (e.g. bigger buts)

therefore, over generations, those with bigger (asians)/ smaller (africans) died out and the ones with preferred phenotypes (i.e. smaller/bigger buts and bone structures) evolved.

Are these people right? Is the stereotype correct? Of course not. These people are ignorant and have no idea what they are talking about. This is just another stupid stereotype that is perpetuated by (both Asians and non-Asians alike). And that similar to breasts, vaginas, and penises there is NO correlation between race and size. Like those body parts, there is a wide variation of butt sizes in all races. So no one race has a monopoly on any particular butt size.

And ultimately, who cares? Butts are biologically there for us to defecate. Size doesn’t help either way in defecating. (And I should also note that penises are meant for urinating and for inseminating, vaginas are meant to give birth, and breasts are meant to provide food for off-spring).

There are people out there who are trying to fight the stereotype. For example, Jeffery Mingo of Homewood, IL created a list on Amazon of examples of “nice” Asian butts in movies. According to Jeffery, “Asian male butts don’t get a fair shake. They can be hot, just like men’s butts of any other races. So notice their butts and enjoy!” Here is his list. (Author’s note: I’ve only seen a few of the movies on the list so I can’t vouch that there are nice Asian butts in the movies but why would anyone make up a fake list?)

Finally, I want to end this “article” on an upbeat note. For those buttless people like me, all is not lost. According to this study, butt size isn’t all that significant in mate selection. (Wait could Yahoo Answers! be wrong?)

“Buttocks size, however, does not seem to play a significant role in determining female physical attractiveness.” (Furnham, et al. 2007)

And if you’re still feeling a little insecure, there are butt jeans.Which according to this reviewer her “butt finally doesn’t look concave anymore lol.” And if you’re really really really desperate, then you can always get butt implants. But it’d be much easier to accept your butt as it is and find someone who will like you for your wonderful personality.

Writer/Producer Koji Steven Sakai is the founder of Little Nalu Pictures LLC and the CEO of CHOPSO (www.CHOPSO.com), the first Asian English streaming video service. He has written five feature films that have been produced, including the indie hit, The People I’ve Slept With. He also produced three feature films, a one hour comedy special currently on Netflix, and Comedy InvAsian, a live and filmed series featuring the nation’s top Asian American comedians. Koji’s debut novel, Romeo & Juliet Vs. Zombies, was released in paperback in 2015 and in audiobook in 2016 and his graphic novel, 442, was released in 2017. In addition, he is currently an adjunct professor in screenwriting at International Technological University in San Jose.
View all posts by Koji Steven Sakai →
This entry was posted in Beauty, Discrimination, Health. Bookmark the permalink.