Giveaway: 4-pack of Tickets to Formula Drift – Round 5, The Throwdown in Monroe, WA 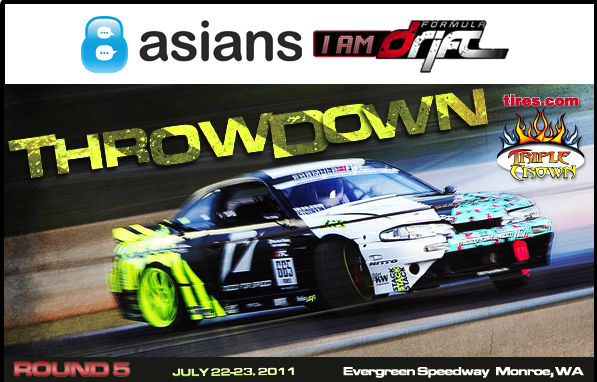 The folks in the Northwest are some of the most die-hard drift fans in the nation. The energy and excitement there is often compared to the original ‚ÄúHouse of Drift.‚Äù The event‚Äôs headline moniker, ‚ÄúThrowdown,‚Äù lives up to its name as drivers push their vehicles to the limits of the track‚Äôs banking and tight transitions through the course resulting in one of the most exciting action-packed events of the season. 8Asians is giving away two (2) sets of four-pack tickets for this weekend’s Formula DRIFT’s Pro-Championship Round 5 – THROWDOWN at Evergreen Speedway in Monroe, WA (July 22 – 23, 2011 at 12pm).

In the last few months since 8Asians is gave away tickets to Formula DRIFT‚Äôs Streets of Long Beach (Round 1), Rounds 2 through 4 were held on tracks all over the nation. (Ken Gushi, who we interviewed here at 8Asians, is currently ranked in 13th place.)

What you could win from 8Asians & Formula Drift:

Hurry, this contest closes soon, so the sooner you enter, the better!
One entry per person, please.

How do you enter?
Fill out the form below:

jozjozjoz is a taiwanese-american gal who lives and blogs underneath the hollywood sign and who doesn‚Äôt clean her fishtank unless the fish starts to do the backstroke. she is also able to leap tall buildings in a single bound, but cannot stop from bumping into door handles, cabinet doors, and anything else that protrudes or has a sharp edge. she does not run with scissors for this same reason. she can pet the fur off a dog but don‚Äôt ask her to go anywhere near a horse. or a moth. or a roach. her dealings with L.A.‚Äôs finest (aka the parking violations department) are legend, as are her giant sneezes. Other than the two too many joz‚Äôs, jozjozjoz is a perfectly normal, relatively sane individual who defies the odds, reaches for the stars, and carries moonbeams home in a jar. She‚Äôd rather be a fish‚Ä¶ but not in her own dirty fishtank. http://www.jozjozjoz.com
View all posts by jozjozjoz →
This entry was posted in Promotions, Sports. Bookmark the permalink.