Asian Americans Like Their Jobs, But Feel Left Out 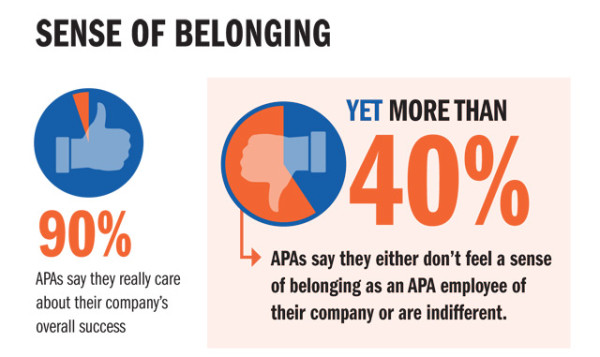 From the Asia Society survey:

“Fifty percent of the APA population over the age of 25 has a bachelor’s degree and 20.7 percent has a professional degree, both nearly double the U.S. average,” noted Asia Society’s Mike Kulma. “Their overall job satisfaction and engagement are critical to the success of U.S. businesses. As Asia Society’s survey proves, cultural and religious acceptance is the main driver of engagement among this group. As such, organizations with a strong focus on supporting and embracing the unique attributes of this group are bound to rise to the top as preferred employers among APAs.”

Personally, I didn’t find any of the findings of this survey surprising. In my own company, I’m extremely loyal, but I can’t say I feel like I belong in the rank and file of my company either. And as an Asian American, my company certainly hasn’t taken advantage of the fact I speak both Mandarin and Taiwanese. While I’ve traveled around the globe, I still haven’t been to Taiwan or China for my current company, although I’ve offered my services quite a few times for those customers. If you work in corporate America and you’re an Asian American, does this survey surprise you?

I'm a Chinese/Taiwanese-American, born in Taiwan, raised on Long Island, went to college in Philadelphia, tried Wall Street and then moved to the California Bay Area to work in high tech in 1990. I'm a recent dad and husband. Other adjectives that describe me include: son, brother, geek, DIYer, manager, teacher, tinkerer, amateur horologist, gay, and occasional couch potato. I write for about 5 different blogs including 8Asians. When not doing anything else, I like to challenge people's preconceived notions of who I should be.
View all posts by Tim →
This entry was posted in Business, Lifestyles. Bookmark the permalink.