Ben “Ben 10” Nguyen will most likely move up the UFC Flyweight ranks with his 49 second submission of #9 ranked Tim Elliott at UFC Fight Night:  Lewis vs. Hunt.   #12 ranked flyweight Nguyen was scheduled to fight #2 ranked Joseph Benavidez, but after Benavidez pulled out of the match with an injury, Ultimate Fighter winner #8 ranked Tin Elliott became his new opponent.  Nguyen stunned Elliott with a head kick and a knee, and when Elliott threw him with a head and arm throw, Nguyen took his back and submitted him.  The head and arm throw is a risky move in MMA, as it exposes the thrower’s back. 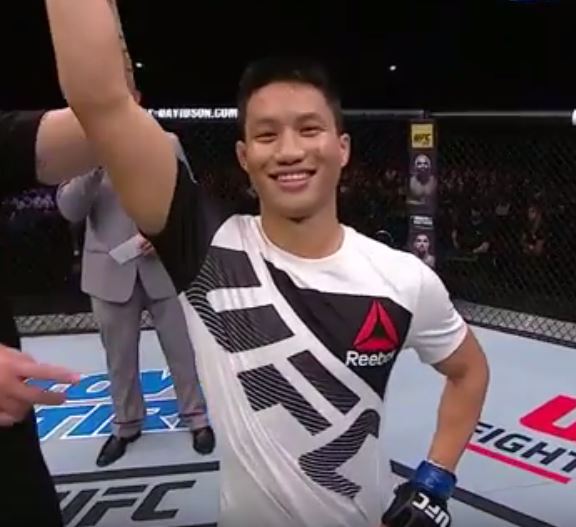 Michelle Waterson used it successfully in her win over Paige VanZant, but against Rose Namajunas, she ended getting her back taken in a similar fashion to Elliott.  “Ben 10” received a performance bonus for his quick and vicious work.

At the end of the match, Nguyen ask the crowd if they thought that the fight was boring.  He was referring to thoughts by the UFC to get rid of the flyweight division as it did not seem to be popular, despite division champion Demetrious Johnson being ranked as the best pound for pound fighter.  I hope that they don’t get rid of the division, especially as Ben Nguyen is gaining prominence not just for beating up a tattooed bully but also winning 4 out 5 matches in the Octagon.