Pack Your Bags: An Uncut Version of “Lust, Caution” Awaits 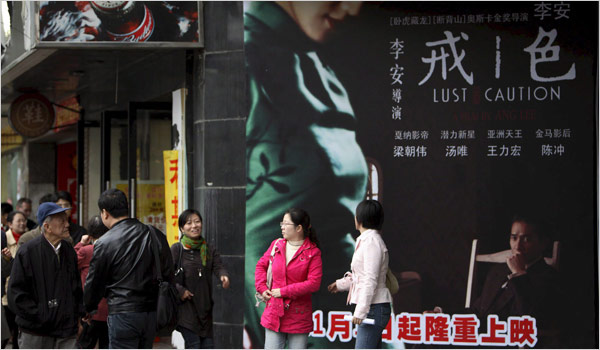 In today’s New York Times, the newspaper reports in the story “Cinephiles, Pack Your Bags. An Uncut Version Awaits“:

“SHANGHAI — For weeks now, the ranks of Chinese visitors to Hong Kong have swelled with a brand-new category of tourists: moviegoers. In a response to the censoring of a film about love and betrayal in Shanghai during the Second World War by the Taiwan-born director Ang Lee, mainland movie fans have flocked by the thousands to Hong Kong to see the full, uncut version of the film, “Lust, Caution.” The phenomenon of so many people voting, as it were, with their feet has highlighted the public’s rapidly changing attitudes toward the long unquestioned practice of government censorship of the arts, and prompted debate about the way films are regulated in China. Travelers have made their way to Hong Kong to see movies before, of course, but always in much smaller numbers. Critics and commentators here attribute the interest in Mr. Lee’s movie to a variety of factors, from word of mouth about risqué sexual content stripped from the censored version, to a sensitive political subtext rarely seen in mainland cinema, to the fame of the Academy Award-winning director….While many have been drawn to “Lust, Caution” by the allure of sex scenes, which even now run the gamut from tame to nonexistent in most Chinese cinema, still more groundbreaking for a film released here is the notion of a traitor in a leading role depicted as an attractive character instead of a villain.”

In today’s interconnected world, censorship I think is almost impossible. It gives me great pleasure to read that mainland Chinese can relatively easily go to Hong Kong to see the uncut version of Taiwanese-American Ang Lee’s Lust, Caution. Of course, the average mainland Chinese could probably buy a pirated DVD of the uncut version or download it over the Internet. Also, given the fact the story is of a Chinese collaborator with the Japanese in World War II is even allowed to be shown in China is interesting to see.

Personally, I thought the film was okay, not Ang Lee’s best film. I thought the love scenes were a bit too long and gratuitous. Amongst my Lee favorites are Crouching Tiger, Hidden Dragon (Zhang Ziyi !) and Eat, Drink, Man, Woman to name a few.