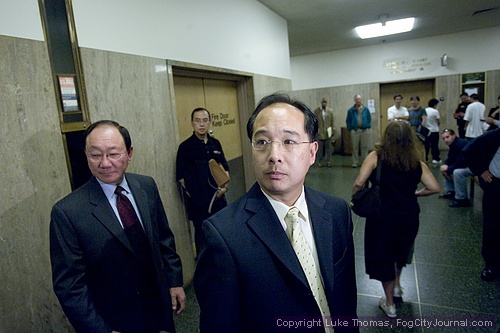 Oh, how the mighty have fallen.

Over a year after he was accused of extorting people who wanted to open Quickly Tapioca branches in the Sunset District in San Francisco, Ed Jew has now pleaded guilty to all federal charges against him, including mail fraud, extortion and soliciting a bribe.

Soon after these allegations came to light, a state investigation was launched where Jew was accused of actually living in Burlingame, a suburb south of San Francisco, instead of actually living in the Sunset.  On top of the long federal prison sentence he already faces, he could face even more jail time after the state is done with its investigation.

According to SFGate.com, his lawyer came up with this explanation: Jew’s attorney said his client believed his actions were legal because that’s how he learned to behave in politics.

No wonder there weren’t any supporters waiting for him this time after he pleaded guilty today.

If anything, this embarrassment has led to a huge increase in Asian American candidates running for supervisory positions in SF, including my new home district: the Richmond; and they’re finally not focused on just the Sunset.

Efren is a 30-something queer Filipino American guy living in San Francisco. In the past, he was a wanna-be academic even teaching in Asian American studies at San Francisco State, a wanna-be queer rights and HIV activist, and he used to "blog" when that meant spewing one's college student angst using a text editor on a terminal screen to write in a BBS or usenet back in the early 90s. For all his railing against the model minority myth, he's realized he's done something only a few people can claim--getting into UCSF twice, once for a PhD program in medical sociology which he left; and then for pharmacy school, where he'll be a member of the class of '13. He apologizes profusely for setting the bar unintentionally high for his cousins. blog twitter
View all posts by Efren →
This entry was posted in Current Events, Politics, WTF. Bookmark the permalink.