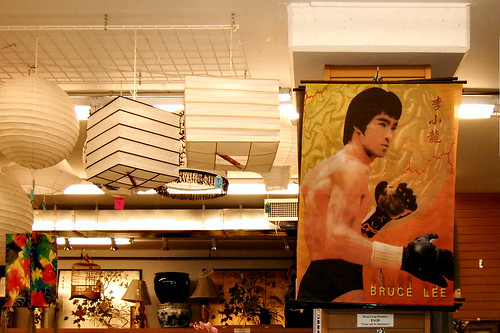 Earlier in the year I blogged about How Bruce Lee Changed the World.  And now Shannon Lee — Bruce Lee’s daughter — is trying to expand and profit more from his legacy, as described recently in the Wall Street Journal:

“In a bid to tap into growing interest in Mr. Lee in China and to develop her father into a powerhouse global brand, Ms. Lee last year bought back the rights to his image from General Electric Co.’s Universal Studios, which had held them since the late 1980s. “They didn’t put the effort behind it I felt should be put behind it,” she says. Universal declined to comment. Then she formed Bruce Lee Enterprises, a licensing company, and LeeWay Media Group, a production company, to raise his profile. Ms. Lee also consulted with the estates of other famous people, including Elvis Presley and John Wayne, to learn more about how to successfully revive a deceased icon’s image. In recent years, the Bruce Lee brand has brought in around $1 million a year, the estate says. With the new push, Ms. Lee hopes she can squeeze $5 million to $10 million from it annually.”

It’s odd to me that the Lee family didn’t own the legacy of their patriarch. Back in September, 60 Minutes did a really interesting segment on “A Living For the Dead” describe how famous dead icons were still generating a lot of income for the family’s estate. Given the fact that Bruce Lee died at the young age of 33 back in 1973, it’s amazing that he’s lived on in his movies and television shows. His impact has directly affected in many ways how Asians and Asian Americans are perceived in the United States and the world. The good for obvious reasons, but have you ever been asked as a kid if you knew Kung Fu like Bruce Lee?

The King of Licensing also happens to be the King of Rock ‘n’ Roll, Elvis Presley, who according to Forbes Magazine brought in $52 million. Actor James Dean brought in $5 million. While I think Bruce Lee is more well known than James Dean, most Chinese didn’t know about Bruce Lee as a result of the Cultural Revolution and China being fairly well closed to the rest of the world when Bruce Lee was alive. Last year, the Chinese state television company CCTV showed a 50-part series — yes, you heard that right — on his life after Shannon Lee licensed her father’s image to the company.

I’m glad Shannon Lee has controlling rights to her father’s image, but I hope she doesn’t do anything tacky to tarnish Bruce Lee’s iconic image. Lee has apparently already starred in a Nokia commercial in China, showing him play ping-pong with a nunchuck and his daughter has signed an off on a Broadway musical about her father which is to debut in the 2010-11 season. Hopefully, we won’t see him vaccuming with a Dirt Devil like Fred Astaire.

I'm a Taiwanese-American and was born & raised in Western Massachusetts, went to college in upstate New York, worked in Connecticut, went to grad school in North Carolina and then moved out to the Bay Area in 1999 and have been living here ever since - love the weather and almost everything about the area (except the high cost of housing...)
View all posts by John →
This entry was posted in Business, Current Events, Entertainment, Observations. Bookmark the permalink.