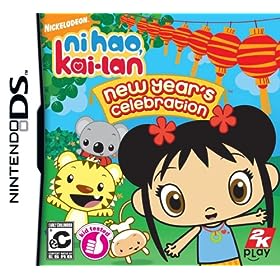 It’s tough being a little kid, let alone growing up with different cultures. So when you actually look at this preschool title of Ni Hao, Kai-Lan: New Year’s Celebration for the Nintendo DSi, you have to smile. And guess what: the Year of the Tiger is only a couple days away.

Graphics: The colors are pretty vibrant on my Nintendo DSi and it seems that Nickelodeon made an effort to make it into very distinct color schemes due to the fact that there are some color and shape mini-games in the story mode. No special cell-shading here, but let’s be honest now, it’s perfect for the target audience.

Sound: Not much to say here. Not like I play early childhood video games games as a habit, but I assume they used the same voice actors as the cartoon and had them do sound bytes. This was pretty cute, as an educational type game but I wouldn’t want to hear it over and over again as an adult. But the game is for pre-schoolers, and for them, it’s fantastic.

Dynamics: My favorite section of reviews: I thought the overall gameplay to be very linear — not a bad thing for younger minds. The mini-games go from one to the next and don’t really stop for anything. Also interesting is that neither the directional pad or A,B,X,Y keys work. And I’m pretty sure that this was by design; you figure that as a young child, you’ll probably be using the stylus more than anything, so all of the controls are built into the touchpad. From that perspective, I think that it was a brilliant move, although I’m curious as to what age group does actually start to tinker with the keys.

My one single black mark — only like a semi-gray one, really — is probably when Kai-Lan asks you to say something. At first I was trying to say the words but on a offhand thought, I decided to blow in the microphone instead. What’s strange is that it also worked and took it. Now, this isn’t necessarily something that 2K Play can control, but I don’t know how sensitive a DSi can detect actual word patterns. It’d be curious to do some testing in this fashion, but that’s for another day.

Overall: 2K Play is the division of 2K that creates games for this age group. So if you have a little one, love this game, and am looking for similar titles, go there first to find more information. Kai-Lan is a cute series that delves into the Chinese culture and I think that it’s great that we’re starting to see this beginning to pop up even in mainstream gaming.

Ben Hwang is involved in a number of online publications and also writes at his personal blog, LUX.ET.UMBRA. When he's not in the middle of starting companies and dreaming up new ventures, he is heavily involved in local community efforts. Currently resides in North Carolina.
View all posts by Ben →
This entry was posted in Entertainment, Video Games and tagged 2K Play, age, kai lan, new year's celebration, nihao, Nintendo DS, pre-school, review. Bookmark the permalink.