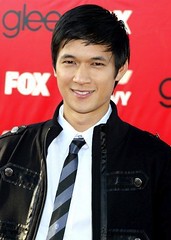 Before Harry Shum Jr. was poppin’ and lockin’ on the pop culture phenomenon known as Glee, he was — well — dancing. Before his stint as Mike Chang on the show, he appeared in iPod commercials as well as dance-centric movies like Stomp the Yard and the Step Up franchise (including the 3-D version out in August). He can also be seen ticking and floating in the Legion of Extraordinary Dancers (The LXD). On top of all that, he will be going on tour starting May 16 with his fellow New Directions members.

He’s quite a busy guy.

Nonetheless, Shum’s role as the jock-turned-show choir member is part of a show that is a current staple for Tuesday night TV. I had the opportunity to talk to him in an early morning phone interview about stereotypical Asian American paths, his role as the “Other Asian,” and how he’d react if Christopher Walken guest starred on the show. Check the interview out, after the jump!

Was there a specific point where you realized Glee was — in a manner of speaking — becoming bigger than you?
We knew we had something special – but I didn’t realize it until we went to the Philippines and Hong Kong last Christmas. It was a big deal over there.

Wow. Really?
Yeah. It really shocked me – I didn’t expect it to travel all the way over there. That’s when I realized that this show is going to be huge.

So where were you five years ago? During your pre-Glee years?
I was dancing. I was working hard to get gigs and trying to establish my goals in the entertainment business. I was struggling for a bit to find that happy medium of making my parents happy and dancing. I didn’t want them to regret me not finishing college. I wanted to call myself an entertainer and build my career to what it is now.

You say that you were trying to “make your parents happy.” Does that have anything to do with the traditional path of “Asians need to be in the medical and engineering field”? Did you have to fight with your parents with what you wanted to do with your career?
Everyone has to fight with the parents when they choose any career. We need doctors, engineers and we, of course, need entertainers. My parents have been always been supportive and pushed me towards finishing college and that stable career. They didn’t know much about the entertainment business and that’s why they wanted me to stay away from it. When I started to become more successful and they started to see me on television, they started to think, “Okay, this kid is going to be alright.”

That seems to be a popular answer when I ask Asian Americans that question: parents need “proof” when it comes to careers in the arts.
They are all about proof. They don’t wanna hear it — they wanna see it!

But you did spend some time at San Francisco State University. What did you study?
I studied cinema for a little bit and then went on to international business to please my parents (laughs).

How did that lead to acting and singing?
I never really had a specific path. [My career] came from being at the right place at the right time and trying new things. That’s what it really came down to. I joined a dance team in high school and was in theater. I just wanted to enjoy the journey. I didn’t want to force things to happen.

Well it definitely paid off. You’re on a show that everyone worships. Is there anyone you want to guest star on the show?
I would flip out if someone like Christopher Walken came in — or someone like John Travolta –someone you wouldn’t expect.

It could happen.
That would be insane!

Switching gears to more “progressive” questions,  you were referred to as the “Other Asian” on a couple of episodes. Did you think that would ruffle some feathers in the community of militant Asians?
It’s a funny joke — it’s all in good fun. I don’t find it offensive. We should be able to laugh at it and move on.

Why shouldn’t people get offended about the tongue-in-cheek portrayal of race, class, sexuality and gender on the show?
There’s a lot of that happening on TV and movies right now. There is a place where it is degrading, but sometimes it’s okay to laugh at yourself for people to understand you. It is the job of the individual to progress from themselves.

So people shouldn’t get their fists in a fury over it, right?
People have every right to be angry, but you have to build towards equality. That’s what’s great about Glee, you see different cultures. Plus, it’s comedy – you’re going to be made fun of.

Dino-Ray Ramos is a movie hobbit, social media swaggerist, pop culture junkie, smart-mouthed Asian American warrior, and a well-rounded inhaler of all things entertainment. After uprooting from Texas, he migrated to San Francisco where he shares his irreverent take on high and low brow aspects of culture. In addition to feeding TheFinerDandy.com he writes for AfterElton.com, Hyphen Magazine and the San Francisco Chronicle. You can also boost his self-esteem by following his musings on Twitter
View all posts by Dino-Ray →
This entry was posted in 8Questions, Entertainment, TV and tagged Glee, Harry Shum Jr, television. Bookmark the permalink.