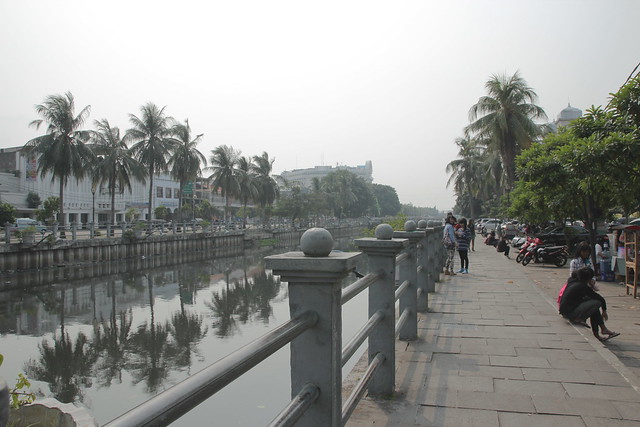 “I am Charlton Heston” I said to myself when I woke up late in the morning on Idul Fitri, or more popularly known in Indonesia as Lebaran, the last day of the Ramadan in Islam (this year it was on 20 August in Indonesia, it varies by each country’s moon calendar). It wasn’t my first Ramadan, I had experienced bits and pieces of it with the few Muslims I knew in the Philippines, who best described it to me as “Christmas or Thanksgiving every day for a month” in their own words. Never a full month, just invitations to break fast with them if I happened to run into them.

As I step out into the surreal, placid city that is almost abandoned in the south of Jakarta, you would never have thought anyone had lived here before. The usually noisome and loud, overcrowded urban landscape has very few people on the streets aside from the occasional 7-11 employees watching for the few people left behind. Walk around, and yes, I am Charlton Heston in The Omega Man, but with mosquitoes instead of vampires.

Before Ramadan first started, I was warned it would be an adjustment for those not used to it: most, if not all bars and clubs close for the majority of if not the entire month; malls and very few street vendors would be my best bet for food. Then if I didn’t already have my own food, I could go to the offensively expensive 99 Ranch Market and buy some groceries to cook for myself. People warned me they would likely be in zombie mode from fasting, all courteously sensitive to me being a non-Muslim, non-Indonesian foreigner experiencing Ramadan for the first time. This was zombie mode in the traditional definition of being tired, slow, and hungry, but still functional; not the undead legion from the Hollywood and comic book sense.

On the first day, the neighbors who spoke no English knocked on the door of my room in the guest house I reside in and insisted I join them for buka puasa to break the fast. Being a free-spirited vagabond, I was happy to take part in the festivities as a guest and outsider. Music is my religion (yes, you read that right), so nothing stops me from joining in another group’s traditions, like I’ve done before with other groups–I’m down with the Jews, hip with the Hindus, cool with the Catholic schoolgirls, and usually check “Buddhist” when personal information forms ask me to quit being a jackass and choose only one practice instead of checking them all. “I just want to love God”, said Pi Patel in Yann Martel’s The Life of Pi, and following suit, I, Johnny C, don’t feel any need to create divisions between me and other people.

The Americans and Canadians and their Thanksgivings have nothing to compare to that openness and welcoming, family atmosphere I felt on my street. My friend Dan, former Jakarta denizen, tells me it’s even more open in Malaysia, where you could literally walk into any open door and join people’s celebration. Hard to believe because as a result of me always walking alone, locals immediately invite me to break fast with them, since nobody should be alone in the most wonderful time of the year. They also aren’t used to seeing people alone and by themselves. Then again, I can go anywhere in South and Southeast Asia and blend in with the locals most of the time, something that my friends of fairer skin don’t have. The foreign buleh are assumed to be doing their own thing and not interested in local practices. I look like a lonely local who’s J-rock hairstyle and vest indicate I’ve at least spent time abroad and should be invited as an honorary family member for breaking fast. Many times, I joined them as they broke the fast and it became more awkward to eat alone throughout the day while most people were observing Ramadan (my office has Christians, Muslims, Hindus, and Buddhists). Going on Ramadan schedule became my new way of life: avoiding traffic from 5:00-8:00, planning my meals to coincide with the people I’d be joining for dinner, or trying to eat earlier or later instead so that I wouldn’t deal with huge crowds lining up to break the fast. It was a time of wonders every day with the happiness and festivity, and on the last weekend of Ramadan, it ended.

On that last weekend, everyone went home to the provinces to be with families. No maids, no motorcycle drivers, no guest house owner, just me, a few street rats, monitor lizards and cockroaches, and hell of a lot of mosquitoes. Even if I didn’t have less than $15 USD in my pocket at the time, very few people were around, which also meant taxis would be scarce, so I spent it doing my own personal meditation and reflection.

I recall from my days majoring in Southeast Asian studies at UCLA was that one thing in common from Burma to the Philippines in each country historically is that people were the most important resource and the mark of power. Who cared about territory? The concept didn’t make sense for most of the region’s pre-colonial history, as without people, who speaks your language, labors for your works, practices your traditions, and fights your battles? Sphere of influence, the power of a group’s leader could be equivalent to one huge territorial sprawl one week, and after a conflict between rival peoples, could just be a small crowd that could fit into a neighborhood block, because people would go to the stronger leader. Generally speaking (because my detailed footnotes citing everything from The Cambridge History of Southeast Asia don’t need to be dumped here to placate the Internet know-it-alls), this is a characteristic of Southeast Asia. I think about that as I realize that everywhere I’ve lived in from Jakarta to Bangkok to Manila–there are beautiful sights and places, but without people, even with the population explosion crowding the city streets and every corner, it resembles what the world would look like after Armageddon.

The times I woke up on Christmas morning alone and ate Thanksgiving dinner by myself (for both the Canadian October and American November celebrations) don’t compare to the sudden disappearance of people on the weekend of Lebaran after going from foreign guest to becoming an honorary family member to being completely alone. Where do people fit in? In the Big Durian (Jakarta’s nickname), without people, the emptiness is felt much more strongly, and I did end up missing even the calloused drivers in traffic, street vendors, students, and backpackers exploring the night. After Ramadan, I missed people not just for the openness, but because when others are there, the mosquitoes have other menu options besides me.

Johnny C is a self-described Accidental Asian American: born in California and raised in Hong Kong and Manila, he spends his days traveling as a freelancer for various NGOs in development and human rights. An idealist and adventurer, his travels are both for work and fun, while sharing stories through his pictures, videos, and writing. When he's not dance-walking to indie rock songs on his iPod in cities around the world, he's usually got himself engrossed in a science fiction novel traversing the portals of reality.
View all posts by JohnnyC →
This entry was posted in Lifestyles, Observations, Religion. Bookmark the permalink.