What You Might Not Know about Jonathan Gold, Recipient of the 2014 V3con Visibility Award 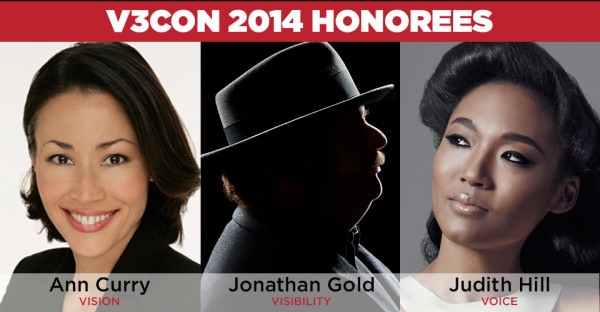 You know the drill: Ask a friend or significant other where they’d like to eat. Lob several ideas back and forth. Then look at each other, shrug, and repeatedly say I-don’t-know-what-do-you-think until one of you brilliantly suggests, “Let’s check Yelp” – just like you did last weekend.

But what if Yelp didn’t exist?

Well, before Yelp, there was Jonathan Gold. And fortunately for us in the Yelp Age, there is still Jonathan Gold. This year’s V3con Visibility Award honoree has amassed, over decades as a food critic, an amazing wealth of knowledge and experience of Southern California restaurants. He has written for numerous publications like LA Weekly, Gourmet, and the Los Angeles Times, and he can be heard weekly on radio station KCRW’s program Good Food. He’s written books, serves frequently as a coveted interview subject and panelist, and – oh, yeah – in 2007 he became the first person ever to win a Pulitzer Prize for food criticism. At V3con, there will be yet another first; he’ll become the first person of non-Asian ancestry to receive one of the prestigious V3con Awards!

Really, no one else in Greater Los Angeles seems to know more about eateries of every dollar range and ethnicity. His Twitter feed, in fact, sometimes turns into a list of extremely detailed queries of where to eat, as if he were a Super Siri for restaurants. Who needs Yelp when you’ve got Jonathan Gold?

And arguably, no one else in Greater Los Angeles has done more to promote Asian cuisine. Several hundred local Asian restaurants have found a place on the map of diners’ collective consciousness through his reviews. In fact, Fox 11’s Susan Hirasuna tweeted just this past weekend that no less an authority than Kogi’s Roy Choi (and 2013 Vision Award Honoree) told her, “Jonathan Gold has done more for Asian food than anyone!”

But he’ll be receiving the V3con Visibility Award not only for that. He’ll be receiving the award because his work, read and heard by millions week after week, has helped to bring Asian American culture into the SoCal mainstream. As Gold, who is Jewish, recommends Asian dishes to non-Asian readers and listeners, he’s also recommending Asian American culture.

Indirectly, then, he ends up advocating for Asian Americans themselves. Writing for the Washington Post in 2009, Gold observed, “Food has become inextricably connected with personal identity.” So by normalizing, as it were, Asian food and Asian culture, Gold decreases his readers’ sense of Asian American “otherness” and increases their appreciation of Asian American identity – and of Asian Americans, period.

It makes intuitive sense that food critics are cultural advocates. But who knew they can also help to fight prejudice and bring diverse people closer together? At V3con, Jonathan Gold will be recognized for this incredibly valuable work!

Jonathan Gold will also appear at V3con on Saturday afternoon in an exclusive sit-down conversation with Davan Maharaj, editor of the Los Angeles Times.

Thanks for rating this! Now tell the world how you feel - Share this on Twitter and on Facebook.
(Nah, it's cool; just take me back.)
MOODTHINGY
How does this post make you feel?
This entry was posted in Community, Food & Drink, Southern California. Bookmark the permalink.