Jeremy Lin and the “Chink the Armor” ESPN Headline Writer 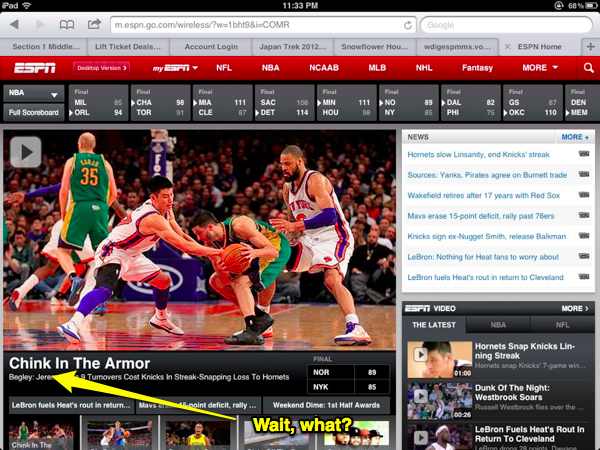 When Anthony Federico came up with this boneheaded headline about Jeremy Lin having a bad game against the Hornets, he certainly wasn’t expecting the world of hurt that soon would be heading into.  His name was leaked, he was instantly villainized, and he was fired.  In this story from Boston Public Radio station WBUR, he talks what happened and how he became a Catholic priest.  What fascinated me the most about his story was an incident I had not heard before, when Jeremy arranged to meet him and what happened in that meeting.

He told me that he didn’t think that the headline was racial in intent, and that was so huge to hear,” Federico recalls. “I’m eternally grateful to him for his kindness. So we talked about the headline for a few minutes, and then we talked mostly about the world and our faith.”

Federico views that conversation as a turning point for his mental health.

“Very much so,” he says. “I felt like like that was a moment of, ‘Wow, he didn’t have to do this.’ In fact, it probably would have been easier for him to just let it go. That is the kind of gesture that someone doesn’t forget.”

That story made me appreciate Lin that much more.  It also reminded me of how graciously he dealt with Kenyon Martin’s criticisms of him twearing dreadlocks.

Anthony Federico, as the interview mentions, is now a parish priest in Connecticut.  Jeremy Lin, after winning a championship with the Toronto Raptors, is now with the Beijing Ducks.