The Chinese aren’t into peace and quiet?

In fact, it’s was very interesting when I was perusing Blognation’s Mind the Gap, and practicaly laughed out loud when I saw this littie bit:

“Not so in China. Farmers, workers, and even rich businessmen have adopted the universally-accepted practise of perforating other people’s eardrums by shouting way too loud down the phone. You’ll hear folks yelling wei? wei? wei? (Chinese for Hello?) until Kingdom Come, and even then, the shouting won’t end.” 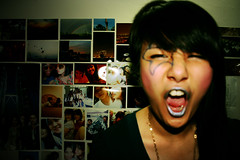 Maybe it’s a Chinese thing. Maybe not. What’s strange is that I made this realization on a trip back home earlier this year. People always wondered why I spoke to my parents at a decibel level that was a lot higher and I always thought they were nuts. Not so true. Having not been home in a while, I was trying to maintain a conversation with mom, and made the realization that it indeed was louder. Why? Because the television was going on full blast and no one wanted to turn it down. Instead, it was a besting of loudness to see whom could shout it out at the end of the day.

Funny how that is. I didn’t realize it and I’d be curious as to if other Asians have the same sort of deal going on or if it’s just confined to the Chinese. Maybe it’s not all Chinese, although that observation by David Feng hit it right on the spot.

Anyone else have the “crank it up” syndrome?

Ben Hwang is involved in a number of online publications and also writes at his personal blog, LUX.ET.UMBRA. When he's not in the middle of starting companies and dreaming up new ventures, he is heavily involved in local community efforts. Currently resides in North Carolina.
View all posts by Ben →
This entry was posted in Observations and tagged chinese, language, speaking. Bookmark the permalink.