Will Yun Lee, One of the “Sexiest Men Alive”

I had previously profiled Will Yun Lee in my blog post “Bionic Woman: Looks Like Starbuck Has Yellow Fever.” Well, in the most recent issue of People Magazine, their “Sexiest Man Alive” honor goes to Matt Damon, but the magazine goes on to honor other sexy men, including Will Yun Lee:

“The 32-year-old star plays a special agent on Bionic Woman, but if he had the chance to step into a bionic body, what would he want made super-strong? “Bionic legs. Can any guy be trusted with bionic vision?” You’ve gotta love a man who’s honest!” 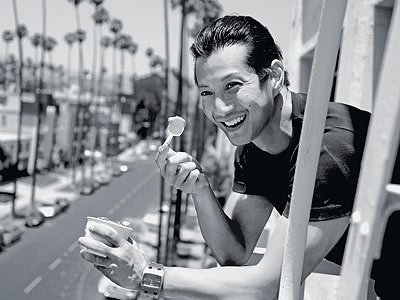 Last year, Survivor’s Yul Kwon was listed as one of the Sexiest Men Alive. Maybe this is a trend! But it’ll take more than People’s Sexiest Man Alive issue to change Americans’ stereotypes of Asian-American men.

I'm a Taiwanese-American and was born & raised in Western Massachusetts, went to college in upstate New York, worked in Connecticut, went to grad school in North Carolina and then moved out to the Bay Area in 1999 and have been living here ever since - love the weather and almost everything about the area (except the high cost of housing...)
View all posts by John →
This entry was posted in Entertainment, Observations. Bookmark the permalink.