Where Boys Were Kings, a Shift Toward Baby Girls

In today’s New York Times, the newspaper reports that in South Korea, “Where Boys Were Kings, a Shift Toward Baby Girls“:

“According to a study released by the World Bank in October, South Korea is the first of several Asian countries with large sex imbalances at birth to reverse the trend, moving toward greater parity between the sexes. Last year, 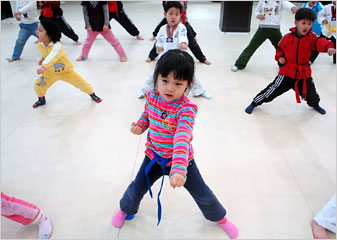 the ratio was 107.4 boys born for every 100 girls, still above what is considered normal, but down from a peak of 116.5 boys born for every 100 girls in 1990. The most important factor in changing attitudes toward girls was the radical shift in the country’s economy that opened the doors to women in the work force as never before and dismantled long-held traditions, which so devalued daughters that mothers would often apologize for giving birth to a girl. The government also played a small role starting in the 1970s. After growing alarmed by the rise in sex-preference abortions, leaders mounted campaigns to change people’s attitudes, including one that featured the popular slogan “One daughter raised well is worth 10 sons!” …The preference for boys here is centuries old and was rooted in part in an agrarian society that relied on sons to do the hard work on family farms. But in Asia’s Confucian societies, men were also accorded special status because they were considered the carriers of the family’s all-important bloodline.”

The article goes on to describe the growth of the South Korean economy as well as liberalization of the government from an authoritarian to a truly democratic nation as helping change Korean society’s attitudes of girls and women. Additionally, demographers are hopeful that such changes in Korea can be translated to China and India, where sex imbalances between boys and girls are still pronounced.