Immigrants just want to blend into the crowd 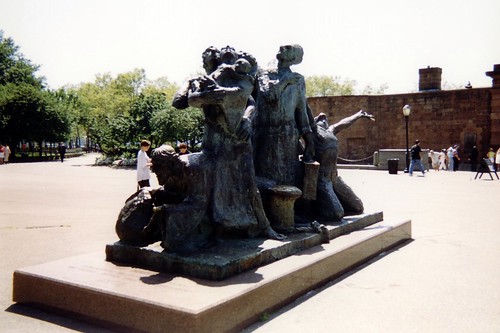 Interesting conversation I had with a friend of mine. I had asked why he spoke American English without an accent since he was taught in the style of British proper as are pretty much all Asians that immigrate to the United States. To this he responded with, “…amalgamated it with American English to not stand out.” The last two words were pretty interesting.

Stand out? But in American education, you’re taught that you are brilliant, wonderful, and definitely special. In fact, there’s a school of thought that you should be standing out from the crowd. And don’t get me wrong, that’s a pretty wonderful thing. If we didn’t stand out as individuals, we wouldn’t have people like Steve Jobs and the like. But it is interesting that immigrants have taken an opposite stance and do not wish attention drawn to them. In fact, they just want to blend into the crowd instead of pushing to the front.

It makes you wonder from a cultural perspective what creates this type of mentality and the pros and cons of each especially in a economically driven society. It all goes back to why Yankee ingenuity reigns supreme in many things such as research and development, but as a work force, Asians seem to be more docile which often is to the delight of a management team. For those of us that are raised here in the more westernized environment, it’s not even a question about how we’re often more outgoing than our friends across the Pacific. But it does raise some interesting thoughts. Do those of us Asian Americans then have the best of both worlds? I believe it’s very possible.

Ben Hwang is involved in a number of online publications and also writes at his personal blog, LUX.ET.UMBRA. When he's not in the middle of starting companies and dreaming up new ventures, he is heavily involved in local community efforts. Currently resides in North Carolina.
View all posts by Ben →
This entry was posted in Observations and tagged culture, immigration. Bookmark the permalink.