What is “Marriage Protection”? A Social Conservative’s View on Prop 8 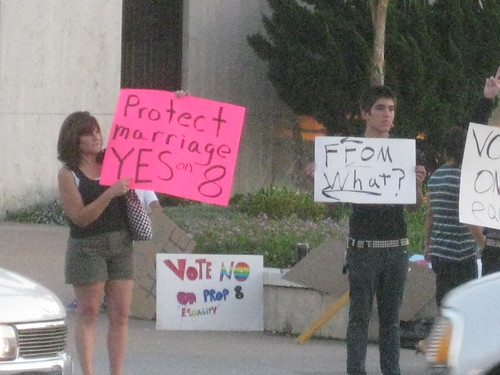 The irony was not lost on any of us when the initiative measure known as Proposition 8, which fundamentally alters the California state constitution, would be titled the “California Marriage Protection Act” (emphasis my own). It might have been titled the “Marriage Definition Act,” as the initiative seeks to define what is and is not “marriage.” “Marriage Protection,” however, no matter where one stands on the issue, makes no sense.

Marriage is an institution. It is an establishment, an organization of behavior or relationships charged by social and cultural models. Social and cultural models change with time, with the changes relative to the demographics of the people in that society or culture. Thus, institutions change. They change because people reach little epiphanies along the way about what “fair and justice” or “equality” means.

Please, by all means let us argue and debate over what “marriage” means. Discourse is good. Where civil rights may be involved, though, it becomes imperative that we first find common ground. So let’s say “marriage” at its very basic definition, means the formal ratification of a human union or relationship. Marriage is the institution that governs that formal ratification process. This denominator protects the most people. That’s what our purpose here is, right? To protect people, namely our neighbors, who we love; because when God said love thy neighbor, the implication there is that we ought to protect them. That’s part of what it means to love.

A “Marriage Protection Act” should therefore protect all human unions or relationships that seek to be formally ratified. Then, the details of the governance would be worked out through the democratic ways we Americans have been trying to preserve with our War on Terrorism. A provision that reads “Only marriage between a man and a woman is valid or recognized in California” (which is word for word how Article 1, Section 7.5 of California’s Constitution will read if Prop 8 is passed) is not a protection of the institution of marriage, but rather is explicit discrimination within the institution of marriage.

Before we go any further, I would like to revise Section 1 of Proposition 8 so that our laws utilize language more precisely. It is the “Marriage Definition Act” at its nicest and “Marriage Discrimination Act” at its most accurate. I would be okay with any of those two titles. I am not okay with the misleading title “Marriage Protection.”

As a social conservative, I am voting NO on Prop 8 because marriage is sacred to me, and I oppose any law that might pervert the sanctity of marriage.

Even if equal protection is irrelevant to me (as a minority in this country, equal protection should NEVER be irrelevant to us), I still care about the economy. Passage of Prop 8 means significant revenue loss, mainly in sales taxes, to state and local governments. This could mean a loss of tens of millions of dollars in just the next few years. That kind of money does not sound negligible to me, and I’m sure a public school district receiving that money for rehabilitation wouldn’t consider it negligible, nor would any other group or institution receiving those “excess” funds.

Finally, if we really want to pass Prop 8, then we must also rethink the Pledge of Allegiance. “With Liberty and Justice for All”? We should amend it with a measure called “Justice for All Protection Act” and include an asterisk with a list of exceptions by the word “All.”

Oh, and no, I won’t bother tying this into Asian Americanism to validate this post’s place at 8Asians.com. As people who have historically been excluded from what “All” means in this country, it would be shameful for any of us to support any form of inequality.

[Editors note: Although the blog post was written by akrypti, the title was conceived by Ernie. Flickr photo credit: brenbot.]

small town roots. enthusiast of many trades. oh, and yeah, high-maintenance like you wouldn't believe. tweet with me @akrypti.
View all posts by akrypti →
This entry was posted in Discrimination, Family, LGBT, Lifestyles, Politics, WTF and tagged Prop 8. Bookmark the permalink.