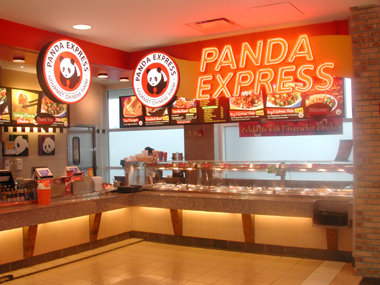 While catching up on my twitter feeds, I noticed a rather interesting article from rayfilwong‘s blog, Campusfork: UC Berkeley students protest Panda Express.  Apparently a group of 40 students last week  protested after Panda Express expressed interest in setting up a restaurant on campus, though given the take from SFGate and the Daily Californian, there was no one unifying reason why there was so much hubbub over this.  Varying reasons such as it being a chain and thus less likely to be willing to negotiate for healthier/vegetarian food options, to the amusing comment that “people can already eat cheap, indigestible Americanized Chinese food on campus,” were brought up.  The issue of authenticity is something I find rather curious and a moot point, but that’s a topic for another post.

The lack of a unifying protest that would be a rallying point against Panda Express (which  by the way is run by a Chinese American family down in LA) weakens the argument against a Panda Express at Berkeley, and the reputation that Berkeley protests everything simply for the sake of protesting doesn’t help either.  Panda Express was already willing to provide healthier alternatives for the Cal campus, and they are leasing a space that apparently is notorious for being impossible to rent out, so honestly it seems like a win-win situation for everyone involved.

And I’m a little partial to the orange chicken, even though it used to be a lot better when I was in college when they actually put in the dried orange peel in the chicken.  But I digress.

Efren is a 30-something queer Filipino American guy living in San Francisco. In the past, he was a wanna-be academic even teaching in Asian American studies at San Francisco State, a wanna-be queer rights and HIV activist, and he used to "blog" when that meant spewing one's college student angst using a text editor on a terminal screen to write in a BBS or usenet back in the early 90s. For all his railing against the model minority myth, he's realized he's done something only a few people can claim--getting into UCSF twice, once for a PhD program in medical sociology which he left; and then for pharmacy school, where he'll be a member of the class of '13. He apologizes profusely for setting the bar unintentionally high for his cousins. blog twitter
View all posts by Efren →
This entry was posted in Food & Drink, Observations, San Francisco Bay Area, WTF. Bookmark the permalink.