“Why am I the Coolest Asian You Know?” 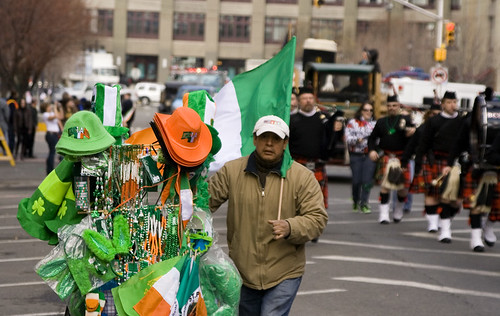 This weekend I went to Hoboken for their St. Patrick’s Day Parade. St. Patrick’s Day in Hoboken is basically an excuse for everyone to get very drunk and celebrate in public; its telling that when someone asked my Irish Catholic friends and I who St. Patrick was, none of us had any idea, so I answered, “I think him and Jesus were best friends or something.” It was a lot of fun.

As my friends and I went to various parties, the crowd was young, fratty — never before have I seen so many dudes wearing short sleeve shirts over long sleeve shirts — and extremely white. In fact, I would have been willing to bet that I was the only Asian person in a 10 block radius.

This changed when at one party another Asian guy strolled in. I didn’t notice him until some random white guy came up to me and said, “Yo, now there’s two of you here…You Asians have to fight each other!” To which, I responded something equally absurd: “Yeah, we’re like the movie Highlander. I take down other Asians to absorb their souls.” He laughed, and the two of us shared a beer.

But I spent some time reflecting on this exchange today, and I’m feeling a little weird about it, because it fits in with a pattern of non overt but still racist remarks that I’ve encountered my entire life, and I’ve never been sure how to react to them; one thing I hear sometimes is, “Rob, you are the coolest Asian person I know,” or its slightly more demeaning variant, “Rob, you are the only cool Asian person I know.”

Is that a compliment or an insult? And what does it say about the lens through which people view their friendship with me? The first time a friend said that to me I was moderately pleased, because I thought it signified his willingness to engage with and think past his existing racial boundaries. Now, however, I am beginning to think that the opposite is true – that he and others still view Asian people the same way, but they see me as some sort of weird anomaly and thus not really even Asian at all. Sometimes I get direct confirmation of this, as when one of my friends told me less than a week ago that, “for an Asian person, you don’t act very Asian.”

What to make of all this? After all, these people are my friends, and the fact that they seem to have negative racial stereotypes about my ethnic group doesn’t make me care about them any less, or want to stop associating with them. But that doesn’t mean that I like when this happens, or that I’m okay with the stereotypes.

And more importantly, how do we change this? I argued in a previous post that assimilation is important, and that we need to resist the urge to self segregate. I’ve always lived by that belief, in part because I see it as being my small way of contributing to the cause of Asian Americana, but mostly because it’s always been more natural for me to associate with people outside of a racial filter. But if all I’ve accomplished is gotten myself labeled token white, then either I haven’t done a very good job, or there aren’t enough other Asian people doing the same thing. I don’t know the answer, but I’m interested in all of your thoughts.

Rob is 24 and lives in New York City. He enjoys adventuring, discovering more about himself and the world around him, and connecting with other people.
View all posts by Rob →
This entry was posted in Discrimination, Observations. Bookmark the permalink.