Going to a Hoedown!

On this blog we often talk about diversity and state our expectations that white Americans try to get to know us beyond stereotypes and preconceived notions.  The Daughter’s high school, which is about half Asian and a third white, sent out a notice that they were having a “Hoedown” as the annual father-daughter event, complete with horse-shoe tossing and line dancing.   I knew that this was my chance to go beyond my comfortable Asian-American neighborhood and try to get to know white people and their culture beyond my own stereotypes and preconceived notions.  The Daughter was game, so I sent in the RSVP.  These Asian-Americans were going to a hoedown! 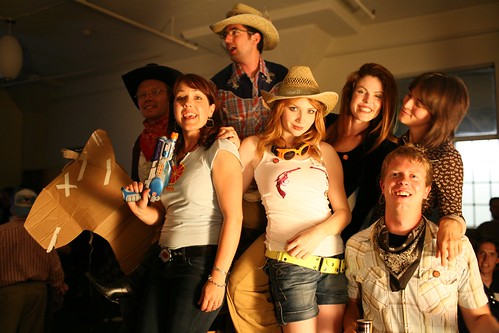 First, what to wear.  Jeans would be good, but what else?  I don’t have cowboy boots.  I don’t have Western wear or flannel shirts — I’m more of a T-shirt/button-down kind of guy.  A denim shirt did the trick (a button-down denim shirt).  The Daughter wore jeans, a T-shirt and a bandana.  Oh well, close enough.

When we arrived, I had the opportunity to meet The Daughter’s white friends (none of her Asian friends went).  They were playing country music, and one of The Daughter’s friends said that this is the music that she listens to.  A real live country music listener — I don’t meet any of those where I live!  Some of the other fathers wore cowboy hats and boots, and it looked like they actually wear them on real occasions and not as a costume for an event.   These white folk seem like nice people.

The line dancing was fun, and I caught on a lot faster than The Daughter.  We did the “Elvira” line dance, which was really close to the “Electric Slide” I had done at countless Filipino parties (what is it about the Electric Slide and Filipinos, anyway?).  I sucked at horse shoes.  I was better at the Hoop Toss — toss a hoop around a cow’s head to win raffle tickets — because I took advantage of my inner Asian Engineer geek nature.  I observed how the hoops bounced off the cow’s head (and resulted in no prize), so I got lower to the ground when I tossed the hoops, reduced the amount of bounce and made my daughter proud by winning those raffle tickets.

Some irony about hoedowns: you’d think it was mostly a “white thing” but Wikipedia claims that the origin of hoedowns was with African Americans.  And many of the Hispanic dads looked pretty comfortable in cowboy boots and hats, which are common in parts of Mexico.

Overall, The Daughter and I enjoyed the experience.   It seemed only fair that we should attend a more white-oriented event, as her school’s dances are always DJ’ed by Filipinos that play the urban music favored by most of the Asian girls.   Silicon Valley and California have no ethnic majority and eventually the same will be true for the U.S.  If we are all going to get along, we’ll need to get out of our comfort zone and explore other cultures, even if it means going to a hoedown!