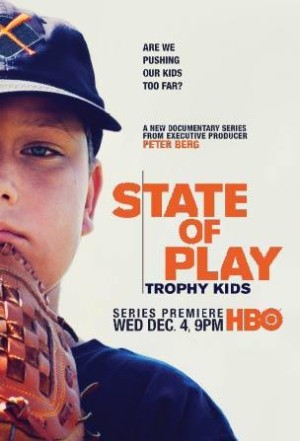 “If she’s crying that’s good, because I’m going to make her tough.” – Andre Avery, after making his daughter cry with his criticism her golf play

In a documentary full of disturbing parental behavior, one thing that particularly disturbs me about “State of Play: Trophy Kids” is a parent’s view of Asians.

“Golf has really turned into an Asian ethnic sport”.  They got their way of doing things, which I love.  And they got money.” – Andre Avery

Andre Avery is the father of 9 year old Amari “Tigress” Avery.  Amari has that nickname because like Tiger Woods, she is half Asian and half African American and has been groomed for a golf career since a young age.  Andre envies Asians, holds up “Tiger Parenting” as an ideal, and tries to get his daughter to buy into his dream for her.   The quotes above are only a warm up for some of his other comments.

“Stupid bitch.” – after a bad shot from Amari

“That’s the difference.  They’re sponsored and get they get their asses whooped.” – after a young Japanese girl beats Amari to win a tournament.

It’s both disturbing and sad that this vision of Asians has propagated – that Asian success come from money and parental beatings.  I really wish that the documentary makers talked to Amari’s Asian mother to see what she thinks of all of this, but I think the filmmakers deliberately focused on the more outrageous behavior of Amari’s father to make a more absorbing story.

While it’s really easy to hate Andre Avery, a sports psychologist in the documentary says that Andre is doing what he thinks best for her daughter.   I would agree, even if his behavior seems like a strange way to do it.  He doesn’t praise her, but he is proud:

“I’m super proud of her achievements so far…  But I can’t tell her how proud until we get to where we are going.”

Although there are no Asian American sports parents covered in the documentary, I have met some like those shown during my years of coaching youth sports. I recall one hard driving parent whose attitude seemed to backfire as his child ended up not even graduating from high school. I have also met one Asian American girl who did get a full scholarship from her golfing skills (she made it to the LPGA tournament while in high school). No idea if her parents were like the Averys’. Also, if you change the subject from getting a sports scholarship for college to getting into a good college, then you can find more Asian American parents who would fit the mold of parenting that the documentary depicts.

“State of Play: Trophy Kids” is playing on HBO through January 2014, and is available on HBOGo at any time to HBO subscribers. Amari Avery is also featured in the film “The Short Game.”