Asians and Alcohol: Why the Yellow get Red 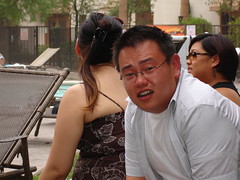 Asians are known for getting red when they drink. Known as Asian blush, Asian glow, or hahaha you’re all flushed, there is no scientific name for this condition. However it does have a scientific basis.

There are two major enzymes in the metabolism of alcohol: alcohol dehydrogenase (ADH) and aldehyde dehydrogenase (ALDH). In many Asians (50% of Chinese, Japanese, and Koreans!), the gene for ALDH has a mutation of a single base that results in a one amino acid difference in the enzyme. With the mutant gene, activity towards the metabolism of acetaldehyde is less than 10% than with the non-mutant gene.

Because the gene is dominant, having just one copy of it is enough to experience its effects. That means that if one of your parents has it, you have at least a 50% chance of having it too.

What is actually happening when you get the Asian flush? It’s an allergy-like reaction that is caused by histamines. Alcohol contains histamines and also causes the release of histamines, while ALDH breaks down both alcohol and histamines. Common symptoms are nasal congestion and flushed skin. Others include heart palpitations, the sensation of heat, headache, and stomachaches, which can continue hours after the consumption of alcohol, as long as the acetaldehyde is in the bloodstream.

Although some who have the glow would rather do without it, scientists have studied the role of the gene in preventing high alcohol consumption and alcohol dependence. In one study, 575 out of 655 Japanese alcoholics lacked the mutant allele. Numerous similar studies have shown that those with the gene are protected against alcoholism. Antabuse, the leading medication for treating alcoholism, inhibits ALDH and causes nausea and flushing, as a deterrent against drinking. However, there isn’t really a cure for Asian blush.

Just be glad you’re not an alcoholic. Cheers!

Lily Huang is a writer of Taiwanese descent, who lives on the East coast. She grew up in suburbia completely oblivious to Asian culture, and is making up for it now.
View all posts by Lily Huang →
This entry was posted in Food & Drink, Health, Lifestyles. Bookmark the permalink.