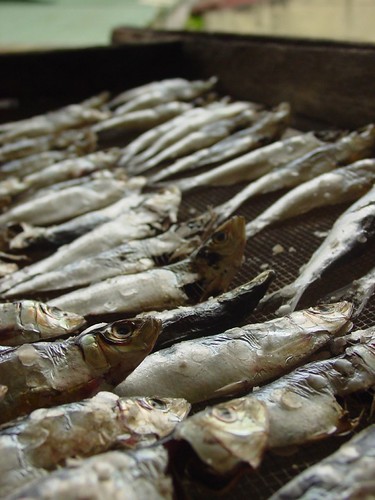 The Philippine News recently reported that an order of nuns in Manhattan called the Missionary Sisters of the Sacred Heart have filed a lawsuit against a Filipina tenant in one of their apartments for cooking Filipino smoked fish, otherwise known as tuyo.

The allegations have gone back and forth with the nuns accusing the tenants, Gloria Lim and her husband Michael, of “endangering life and health” with her cooking; and the tenants accusing the nuns of racism, with Mrs. Lim defiantly saying that she will continue to cook and eat tuyo.

Unless the nuns can prove that the tuyo is detrimental (which frankly it isn’t–I’ve been eating it all my life without any ill effects, and I like eating tuyo for breakfast with some eggs and tomato and onion salad), I don’t think they have much of a case.  And given that these nuns claim to be missionaries, you’d think they’d be a little bit more openminded about non-American foods.

Frankly, they should be lucky that Mrs. Lim isn’t a fan of other things smelly, like durian, French cheeses, or lutefisk, which frankly is ten times worse than measly tuyo.

Efren is a 30-something queer Filipino American guy living in San Francisco. In the past, he was a wanna-be academic even teaching in Asian American studies at San Francisco State, a wanna-be queer rights and HIV activist, and he used to "blog" when that meant spewing one's college student angst using a text editor on a terminal screen to write in a BBS or usenet back in the early 90s. For all his railing against the model minority myth, he's realized he's done something only a few people can claim--getting into UCSF twice, once for a PhD program in medical sociology which he left; and then for pharmacy school, where he'll be a member of the class of '13. He apologizes profusely for setting the bar unintentionally high for his cousins. blog twitter
View all posts by Efren →
This entry was posted in Discrimination, Food & Drink, WTF. Bookmark the permalink.