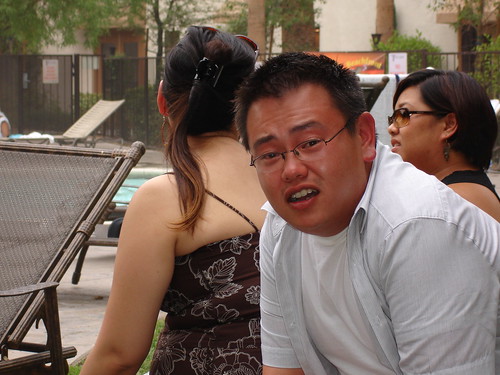 So during one of my recent pharmacy school interviews, I was asked about the future of pharmacy. After I mentioned about how pharmacogenomics, or how genetics influences drug metabolism, will be used to help create drugs to benefit people of color, the professor who was interviewing me said sheepishly, “Uh, the only thing that I know about pharmacogenomics and people of color is the Asian flush.”

I ended up getting accepted.

The “Asian flush” is an otherwise layman’s term for the relatively well known observation that certain Asians (rates have been quoted as being 30% of Chinese, Japanese and Koreans to over 50% of East Asians) are more likely to not tolerate alcohol than others. The reason is that many Asians lack a particular enzyme, ALDH2, thus preventing the metabolism of alcohol (which is a poison in its normal form) into forms that the body can handle. Some people who lack this gene (such as a certain blogger on 8Asians who shall remain nameless) get drunk after only half a drink.

In doing my own research on a presentation on Asian Americans and drug and alcohol use during my doctoral studies in medical sociology, it was assumed by non-Asians in many scholarly journal articles that the Asian flush was seen as a deterrent for Asians to drink alcohol. Anyone who’s ever been to an Asian American nightclub knows that’s definitely not the case.

I thought I was one of those people myself who couldn’t drink alcohol. However, after working out, getting in better shape and fixing my liver, I realized that I had actually inherited my dad’s liver. This means that while I can drink alcohol, I metabolize it so quickly that I don’t really get to enjoy the buzz, so there’s no point in me drinking. Dammit.

Efren is a 30-something queer Filipino American guy living in San Francisco. In the past, he was a wanna-be academic even teaching in Asian American studies at San Francisco State, a wanna-be queer rights and HIV activist, and he used to "blog" when that meant spewing one's college student angst using a text editor on a terminal screen to write in a BBS or usenet back in the early 90s. For all his railing against the model minority myth, he's realized he's done something only a few people can claim--getting into UCSF twice, once for a PhD program in medical sociology which he left; and then for pharmacy school, where he'll be a member of the class of '13. He apologizes profusely for setting the bar unintentionally high for his cousins. blog twitter
View all posts by Efren →
This entry was posted in Food & Drink, Health, WTF. Bookmark the permalink.