One out of Seven New Marriages Interracial or Inter-Ethnic 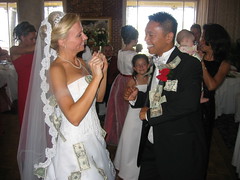 For those that have never really caught it before, yes, I am in an interracial relationship. So understanding quite well that I too am a part of this Pew statistic where one in seven new marriages are interracial or inter-ethnic, I thought it would be fascinating to throw in my two cents on why this is happening instead of speaking on the statistical study itself.

Granted that this is only from my personal experiences and bias but from my perspective, for American born Asians, this actually has less to do with the geography as some may hypothesize and more to do with the strength of cultural divide. Growing up, you would see that first and even some second generation ABCs (American Born Chinese) were very much tied to their culture. They would still attend Chinese school on Saturdays, speak Mandarin, and associate with other ABCs. But as the generations waned, the cultural barriers broke down. No more were people thinking as being “Chinese” as much as they were “American.” This is when westernization basically took over and it was less about the culture and more about the people that surrounded them.

Being that most of us went to school with all sorts of backgrounds and ethnicities, the opportunities to date outside of our culture greatly increased. It’s like having a bunch of black marbles and putting them in a barrel of white marbles. No matter how tightly you pack those marbles, eventually there will be white marbles touching the black ones. In the same sense, the cultures shift and people begin to adopt their own sense of what represents them.

Personally, as a first generation ABC, I find that I have to strive very hard to maintain bits and pieces of my culture without losing them in the bigger fray. Fortunately, my wife is absolutely supportive of keeping cultural ties. In the end, it’s what you make of it and whom you believe is willing to share your life with you in ways that no one else in the world would. And that’s probably what’s defining the out-marrying trend.

(Flickr photo credit: pengrin. The image is not that of the author.)

Ben Hwang is involved in a number of online publications and also writes at his personal blog, LUX.ET.UMBRA. When he's not in the middle of starting companies and dreaming up new ventures, he is heavily involved in local community efforts. Currently resides in North Carolina.
View all posts by Ben →
This entry was posted in Dating, Observations and tagged ABC, Asian-American, chinese, culture, interracial marriage, pew, statistic. Bookmark the permalink.