“When he asked me what was wrong, I could barely utter the word ‘diabetic’. When I finally did, my voice cracked, and I cried just a little.”

This is the story of Marianne Szeto and how she discovered she was diabetic. Both of her parents have type 2 diabetes. Marianne herself has type 1, however.

A Series on Diabetes & Asian Americans

Today’s entry is the second in a 3-part series on Asian Americans and diabetes. I’ll be covering Marianne’s story and how she’s dealt with her disease. The first summarized a recent study that found Asian Americans more likely to have type 2 diabetes than white people. The last will end with an interview with Marianne.

My parents are both type 2 diabetics. In fact, type 2 runs very heavily on both sides of my family. I knew I would get it one day, but as for now, I was young, healthy, active, and had no sweet tooth. I took care of myself.

When Marianne’s symptoms first presented, everyone figured it was type 2, including her doctor. After a day of taking the same medication her parents take, she found herself back in the ER, thirsty, weak, and terrified.

The doctor asked to smell her breath. The smell? Acetone, like nail polish remover. “Diabetic ketoacidosis,” was what he told her. Then he rattled off a mystifying list: Absolute insulin deficiency. Hyperglycemia. Dehydration. Acidosis. Type 1.

“Only the last two words caught my attention,” she wrote in an essay about the onset of her diabetes. “Everything else was a blur.”

I bring up her story not because type 1 and type 2 diabetes are interchangeable – because they’re not – but because of her courage in facing this disease and being a leader in the community; she’s already inspired countless individuals and I hope that if you or someone you know is diabetic, you will read her story and feel inspired, hopeful, or at least comforted by her example.

The Difference Between Type 1 and Type 2 Diabetes

First, an aside: While both type 1 and type 2 are inheritable & incurable metabolic diseases that result in high blood sugar, there are important differences to note:

On Making Diabetes Sexy and Fashionable

After her diagnosis, she rapidly educated herself. Her father helped her create an insulin chart and she consumed books and classes on diabetes. One other participant in her classes had a particular effect on Marianne.

In my classes, I was always the youngest one there. Except once. A young girl – pretty and shy – came to a class with her boyfriend. She was in high school when I realized how young she was, my heart went out to her. In high school, all you want to do is fit in. what about the late nights studying for finals and snacking on a bag of chips? Parties? I realized that I was lucky to be diagnosed after I graduated from college because it would have been so easy not to take care of myself. It was that one pretty and shy high school girl who was afraid of what has happened to her body that really motivated me.

From there, she decided to make the best of it. She decided… to be fashionable.

“I decided if I had to wear a medical ID tag, I would do it in my own special way,” she wrote. “I headed to the bead store. I now have a wide collection of bracelets that I can mix and match with my medical tag.” 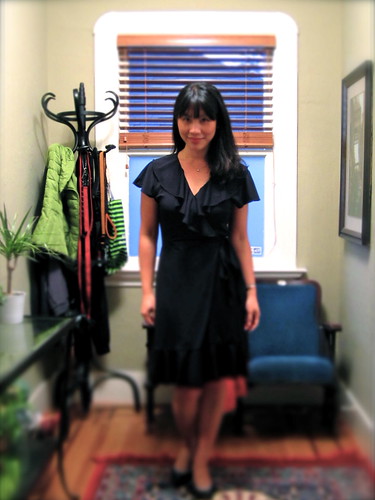 Then she learned about insulin pumps and their ability to provide a constant stream of insulin. That meant no more shots. Marianne was hooked. Literally.

And in her own special way, she made it fashionable too.

I made a pump strap to wear around my calf, just below my knee. When I wear pants, you can’t see it at all. I made a variety of straps. A “going out” strap embroidered with beads. A “Flirty Strap” that is pink with black lace. A “Functional Strap” that is a cool gray that matches everything. The list goes on.

She launched her blog, Diabetties.org, to share her story and support other diabetics. In it is a recent series called Where’s my pump? to show how to be stylish and not a slave to diabetes.

I recently contacted her to find out how she’s been doing. “After living with diabetes for 8+ years now,” she replied of her insulin pump, “it’s about functionality and comfort.”

Then she added, “unless you’re a woman, you won’t completely understand that while a garter might be sexy – it ain’t comfortable. ;)”

If her Flickr set is an example of functionality and comfort, she sure hides it well. It certainly looks like she’s found a way to make diabetes stylish, sexy, and fashionable.

In the next part of this 3-part series, you’ll see an interview with Marianne and how she’s been coping since she created her blog.

I'm an idealistic realist, humanistic technologist & constant student. And what, you want to Internet-stalk me too? Why, sure.
View all posts by Mike →
This entry was posted in Health. Bookmark the permalink.