“The next two nights I stayed in the ER. They pumped me full of two liters of liquid in order to rehydrate my body, and I constantly had a flow of insulin through the IV. I did not go to the bathroom for over ten hours because my body was so dehydrated.”

Marianne Szeto is a type 1 diabetic. She’s been dealing with this disease since she was 23. This is her story.

A Series on Diabetes & Asian Americans

This is the finale of a 3-part series on Asian Americans and diabetes. It finishes with an interview with Marianne. The first part summarized a recent study that found Asian Americans more likely to have type 2 diabetes than whites. The second part covered how Marianne made diabetes sexy and fashionable.

An Interview with Marianne Szeto

I originally contacted her to get a few choice quotes for the piece on the rise of type 2 diabetes among Asian Americans. She replied with a wealth of information. It truly highlights her courage in dealing with this debilitating disease. Here is her reply.

Well, a “Diabetty” is a strong, independent woman, who doesn’t let her diabetes get in the way of living life to the fullest.

How have you coped with being diabetic?

By being honest, open, and unafraid to share how I am feeling both emotionally and physically.I’ve probably coped better than average. My diabetes has opened up a career path for me. Prior to my diagnosis, I was working at Yahoo! – which was fine, but it was just a job.

Being diagnosed with type 1 diabetes made me feel like I belonged to a community, and has allowed me to relate to my parents and relatives in a different way (many of them have type 2). I felt empowered with a desire to help others. It inspired me to go back to school for my Master in Public Health degree. It launched my career.

Don’t get me wrong though – it’s not all peachy keen. I have my moments. In fact, just last week, I was watching Grey’s Anatomy, and one of the guest characters, Henry, had a cyst on his pancreas that was ready to burst. His wife had to decide whether or not to remove the cyst, because doing so would mean that Henry would become an insulin dependent diabetic. The doctor asked if the patient had the support system to live with a difficult disease like diabetes. Could he handle it? That floored me, my eyes immediately welled up with tears. To hear a doctor acknowledge how hard it can be at times – to have a choice? That’s crazy! After the surgery, Henry asks if he’s diabetic, and said “that sucks.” I cried again.

In spite of the fact that l could go on and on about how living with diabetes has enriched my life and led me to a career that I am passionate about, of course I would love to NOT be diabetic. Especially now, as my husband and I try to start a family, we worry about the difficult road ahead of us, managing a pregnancy with type 1 diabetes, and the dangers it poses to my health and the health of the baby.

The recent research suggests that the typical Asian American lifestyle (presumably, Asian foods high in fat) are a potential cause of the increased likelihood of type 2 diabetes in Asian Americans. Do you regulate your food closely? If so, how?

When I was first diagnosed, absolutely. I basically ate vegetables, healthy choice meals, and any packaged foods that I could measure out and know exactly how many carbohydrates were in that serving. That wasn’t sustainable, nor was it particularly tasty – and let me tell you, I sure do love to eat. 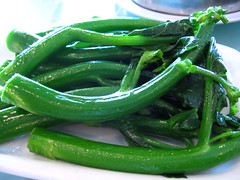 I don’t eat much Chinese food these days. Being married to a Caucasian, we eat mostly American food, and save the Chinese food for when we’re dining with my family. And when we do, I eat just a little bit of rice, load up on Chinese vegetables (I love me some gai-lan and bok choy!), and fish or poultry. Eating foods drenched in sauces always tends to spike my blood sugars, and even dim sum has become only an occasional treat.

I get annoyed by people who believe that diabetics need to avoid all sugar. I’ve had people wag their finger at me when I accept a small slice of birthday cake, or give me disapproving looks if I eat the tiniest dessert. Don’t judge me, please. I believe that diabetics, like everybody else, need to excise moderation. No one should eat a ginormous dessert on their own. It isn’t good for anyone.

I’ve definitely noticed that low glycemic diets help stabilize my sugars. Recently, my husband and I have been eating more beans, protein, and veggies, and avoiding most carbs. Not eliminating them completely from our diets, but definitely reducing our intake of pasta, breads, and grains. It’s interesting – I’ve noticed that I’m fuller longer, and am eating less. Even better – I’ve reduced my insulin intake to about half of what I used to take!

The research also suggests a lack of exercise as a cause for Asian immigrants. Do you do any physical activities to regulate your diabetes? If so, how? 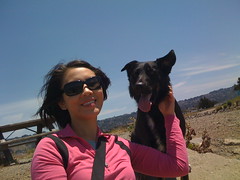 Absolutely. And again – it’s not just for diabetics – everyone needs to get more exercise. I take my dog on a strenuous 2-2.5 mile walk every morning, and then combined with all the walking I do for my commute to work, I probably walk at least 4 miles a day. And I walk fast (just ask my husband!). I used to do a lot more when I had easy access to a gym, but now I rely on my dog as my personal trainer. She’s always ready to go and won’t come up with any excuses.

Starting my days with these long walks is great for my body and for my mind. I also like to do strength training at home. I’m a hardcore multi tasker, so you’ll rarely find me just loafing around watching tv. I’m at least doing free weights or knitting!

Do you have any advice for someone who suspects they are diabetic?

YES – go to the doctor. Monitor your blood sugars. I work in chronic disease prevention, and the best thing you can do is find out early. I have type 1 diabetes, so I was literally healthy and normal one day, and the next day, I wasn’t. But if you have type 2 diabetes, it’s often associated with lifestyle choices. If type 2 diabetes runs in your family, monitor your blood sugars, get regular moderate to vigorous physical activity, and watch your diet and weight. Type 2 diabetics’ pancreases still produce insulin, but their bodies don’t use it effectively, or they just don’t produce enough. If you’re overweight or obese, that makes sense, right?

Do you have any advice for someone who already has diabetes, type 1 or 2? 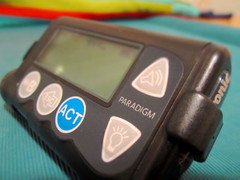 Diabetes is a high maintenance chronic disease. It takes a toll emotionally, mentally, and of course, physically (if you’re not careful!) – so it’s important to have a good support system. A friend, a loved one – just someone who you can be open and honest with, who will look out for you even when you don’t want to look out for yourself; someone who can empathize and try to understand that as a diabetic, each day, we have to make choice after choice that non diabetics don’t have to consider. How many carbs are in this meal? Will it cause my blood sugar to spike hours later? I want to go on a run – lemme just grab my meter, glucose tablets, and water. Have a dress that’s to die for? Where are you going to hide your insulin pump?

The most important thing is to not be ashamed or to hide your diabetes from others. It’s dangerous. I once had an episode at work where my blood sugar dropped so rapidly that I passed out and hit my head on the floor. My coworkers knew I had diabetes, where I kept my glucose, and were able to instruct paramedics when they arrived on the scene.

Thank you for sharing your story with all of us, Marianne.

And as she says to all of us, “let’s help each other. Let’s show the world that Diabetties are smart, sexy, and supportive. Thank you for reading my story. I hope you feel that you can share yours with me.”

I'm an idealistic realist, humanistic technologist & constant student. And what, you want to Internet-stalk me too? Why, sure.
View all posts by Mike →
This entry was posted in Health. Bookmark the permalink.